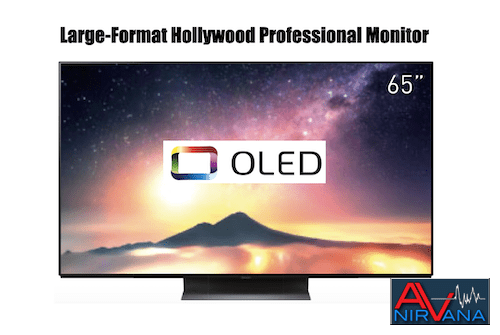 Zohn and his retail/custom install business need little introduction among enthusiast and integrator circles. He’s the creator and host of North America’s annual Flat Panel TV shootout, a winner of industry awards, and a known destination for honest pricing and expert advice. If you’ve never dealt with Zohn, you’re missing out. His knowledge and relationships within the industry run deep, and he’s a true enthusiast at heart.

Panasonic’s display presence in the United States is also rather notable. The company is best known for a successful plasma TV business that produced several legendary reference-grade models. However, the demise of plasma and a lackluster LCD presence left Panasonic retreating to European and Asian markets for a rebirth.

One of Panasonic’s more astute business deals was the 2008 purchase of Pioneer’s industry-leading plasma display division, which netted important patents and nearly 200 top engineers. That move has paid major dividends, ultimately helping the company become an award-winning force in OLED TV manufacturing; its models are lauded for superior processing and image reproduction. While popular, Panasonic’s OLED displays aren’t sold within the United States, which is precisely why Value Electronics’ deal is so exciting.

Adding to the excitement is a unique differentiation between models offered by Value Electronics and those sold to consumers around the world. First, they’re marketed and sold as “monitors,” not televisions. While that’s essentially creative wording, it’s an important note because these are the same monitors used by most – if not all – Hollywood studios. That leads us to our second differentiator: build quality. Models sold by Value Electronics feature hand-selected OLED modules and HCX video processors that are custom-tuned to Hollywood’s picture performance standards. According to Zohn, those factors will limit his stock to roughly ten pieces per month.

These are the real McCoy… true reference grade monitors used by top creators in the business, requiring extreme levels of customization and quality control.

All four models will ship with a TV tuner on-board, along with HDMI 2.0b connectivity (HDMI 2.1 is slated for 2022 availability), and CalMAN auto-calibration. They also carry Panasonic’s One Year Parts and Labor Warranty with an optional Three Year Warranty available through Value Electronics.

Models and pricing (including shipping) are as follows:

This is very fascinating news, Todd! Thanks for sharing this. I'm aware of other brands of displays that are used by Hollywood professionals and these prices from Panasonic are NOT bad at all. I do wonder how the performance will stack up to a Flanders 4K UHD reference grading monitor; those are $11,000 and 55".

I agree. If memory serves, the Sony reference OLED monitor that’s made appearances at Robert’s shootouts sold - at one time - in the $20k range. Not sure if that’s still the case. Times have changed and manufacturers like Panasonic and Sony are putting incredible amounts of processing to good work!

My impression is that Panasonic is a legitimate player in Hollywood - these aren’t monitors that are billed as reference grade for selling purposes. They’re actually used in the industry.

Congrats to Robert... this has to be huge for him.

They are a little out of my price range for my great room, being it's not critical for us in that room... but if I used a display in my HT room, I'd be all over these.

Is it correct that there will only be 10 monitors made per month? At that rate and pricing these could potentially be super hard to get : P

"According to Zohn, those factors will limit his stock to roughly ten pieces per month."

Robert will receive 10 per month. I asked him what would happen if he receives more orders than physical stock, and he assured me that he would have an order list that would be fulfilled as new monitors arrived for shipment.

Wow, that is excellent.

It's tempting to replace the 55" OLED in the bedroom just play with the Panasonic
Last edited: Dec 12, 2020

Jim, I'd love to have our calibrator, John tune one of these stunning OLED display for you to enjoy.

Robert Zohn said:
Jim, I'd love to have our calibrator, John tune one of these stunning OLED display for you to enjoy.
Click to expand...

My worry would be, Sound

You may not remember, I purchased the LG's E6 (which has the sound bar) from you way back when and it has worked out great as a bedroom TV.

The Panasonic speakers fire to the rear vs the E6 to the front. Am I wrong in thinking, while laying in bed, it might be harder to hear the Panasonic in low volume situations such as listening to the TV while my wife sleeps?

Not enough room for the 65". The 55" hangs over the armoire and just under the 10' ceiling and even then there's only inches between the two

Robert - are you going to be getting the HZ line at all?

GZ2000s are scheduled for end of April. I do not know about the HZ line as it has not been requested for Hollywood testing.

The eagle has landed and Panasonic's Hollywood Professional OLED displays are in the house! 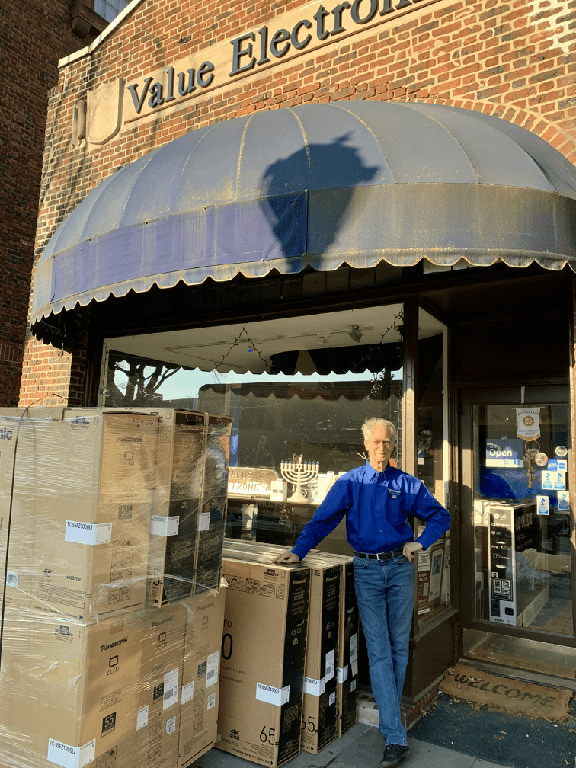 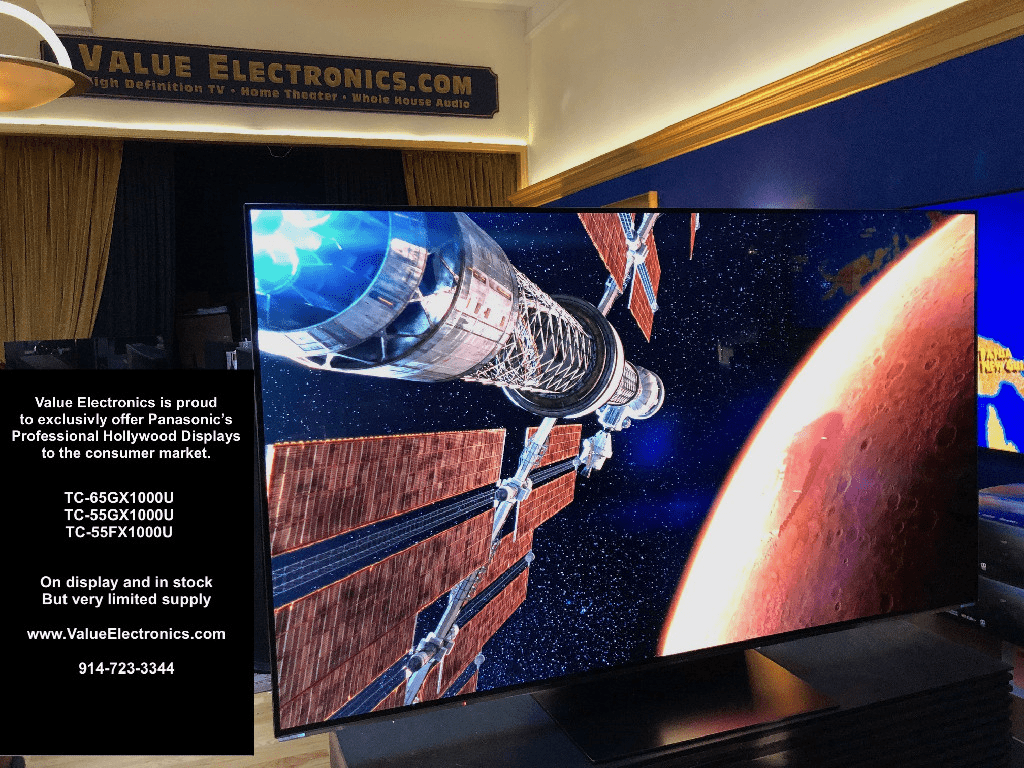 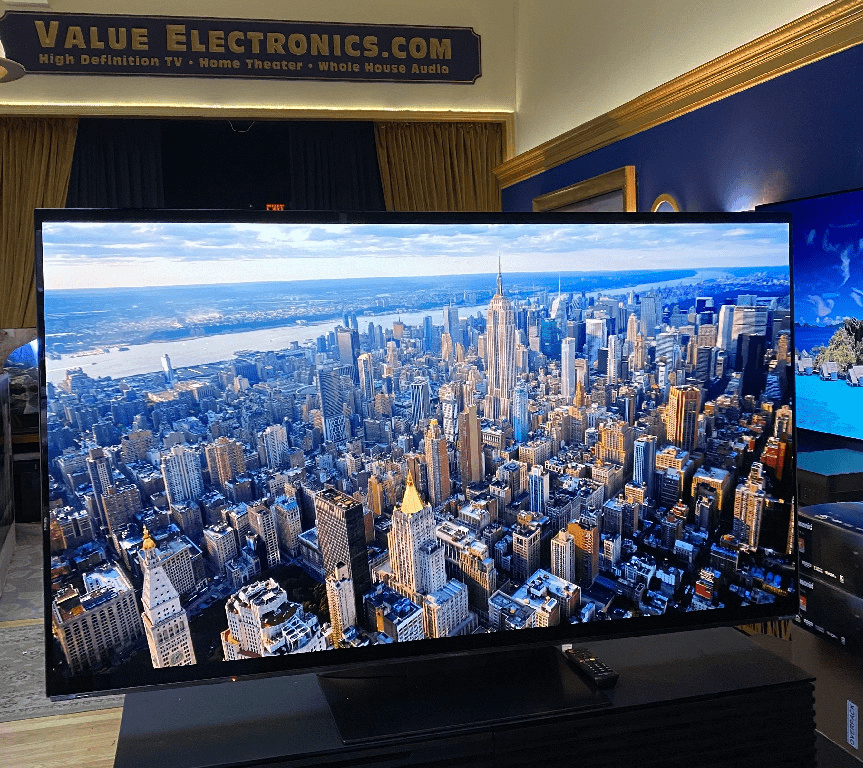 Nice! Who's that tall skinny dude?

So I'm just now thinking about how "downtown" you are. Have you had any issues with rioting in your neck of the woods?

We have lots of surveillance cameras and good security. We're in a suburban community with a small shopping village and we're located on the busy main through street.

Good to know you've not had any issues.

You must be about 7ft tall.

Awesome Robert! Only place in the US selling Panasonic OLEDs.

Check out Spare Change's Youtube video where he interviews me about Panasonic's professional Hollywood displays.

Does Panasonic make their own OLED panels, which is why these excel over others? Or does Panasonic have a 3rd party maker like so many other brands?

The only manufacturer of OLED modules for TVs is LG Display. So all brands of OLED TVs source their OLED panels from LG Display.

What differentiates the brands and models is the video processing, form fit and audio. Plus exclusively just for the Hollywood studios and postproduction in the USA the OLED panels are hand selected and only the panels with he best screen uniformity, no tinting and the highest peak luminance are used for this Hollywood USA professional market.

Thanks for the clarification, Robert!