Are there known issues with DaytonAudio UMM-6 freq response?

Using DaytonAudio UMM-6 with calibration file. Even with no sound in the room and the mic capped on the business end, I get this response (see attached)...
Seems like I should be seeing a perfectly (within the bounds of UMM-6 precision tolerance) flat frequency response.
The little peaks and valleys don't bother me so much, but the increasing slope from 3500 Hz down to 10 Hz means this combination is completely useless as-is.
Have I done something wrong in REW settings - why would it look like this?
Is there a way to abandon the mic calibration file that came with the mic and calibrate manually?
If the room is essentially silent and I have the mic capped (rubber cap) - I'd like to set that as flat response.
Thanks for any advice!

Self-noise in USB mics like the UMIK-1 and UMM-6 is to be expected. That graph doesn't look much different than a UMIK-1. Keep in mind that if the input signal level from the DUT is sufficiently higher than the room noise and the mic self-noise, the mic self-noise will have limited effect on your measurement accuracy. Additionally, you should not smooth the measurements and should instead use averaging. You may want to update your REW install to the latest release candidate, also. 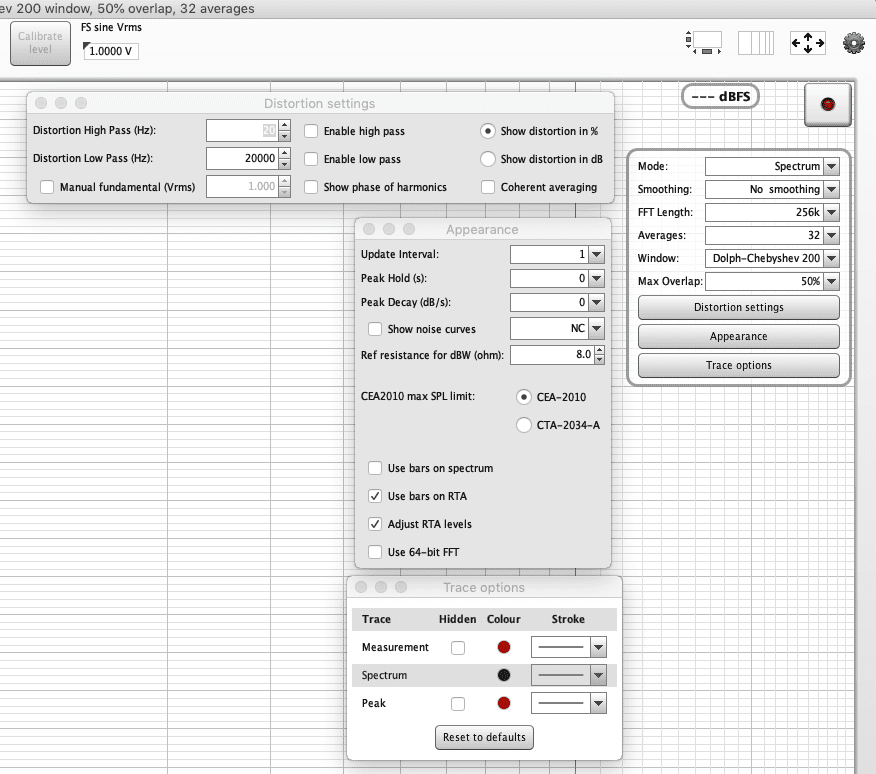 @sam_adams Thank you for the advice, set smoothing to none and averaging to 32 - as you showed. From what I see in the RTA graph, mic response seems to be nearly flat (0dB) from 20kHz down to 3500Hz, then takes on an increasing linear slope to 30Hz, where it ends-up at +40dB.

If the mic is imparting a +40dB slope, and I'm adjusting miniDSP to make the slope flat, then I end up with a result where gain is diminishing below 3500Hz to a -40dB at 30Hz - where I'm trying to get accurate bass. Its not so different than trying to build a house with a bent hammer. Would a person first fix the hammer, or go on struggling to adjust every swing, compensating to drive each nail straight.

Is this a mic quality issue? I thought the purpose of a calibrated mic was to measure linear response? Would a better mic (like Earthworks) result in flat-line linear response? Or maybe there is a calibrate feature in REW, kind of like setting tare-weight on a scale? Cap the mic in a dead-silent room and press the 'calibrate' button. Whatever its outputting when there is no noise to 'hear' should be set to 0dB at every frequency.

40dB sounds like a significant error to me. If I change the volume on my preamp by 40dB it makes a huge difference! Is there a reason I'm missing that makes this issue insignificant?
Without knowing otherwise, I call this mic/system useless as a 'bent hammer' is for driving nails.

To me this mic response explains so many issues I was having - like trying to get that nasty 50Hz peak to go away. I ended-up with PEQ adjustment of -12dB gain and Q = 2.7.
Now I know the mic is hyper-sensitive around 50Hz, and it's actually not the subs - its the mic. So my adjustments are actually creating a false flat response, and in actuality a dip around 50Hz.

You are misunderstanding dB and mic responses. The noise floor is essentially irrelevant bar a few special cases, such as trying to measure high levels of isolation. As an example, what do you think the result would be if 40 dB noise were added to a 75 dB signal? 75.001 dB. The mic response that matters is the one it produces in the presence of a signal, not its self-noise.
S

Here's some tests of my UMIK-1: 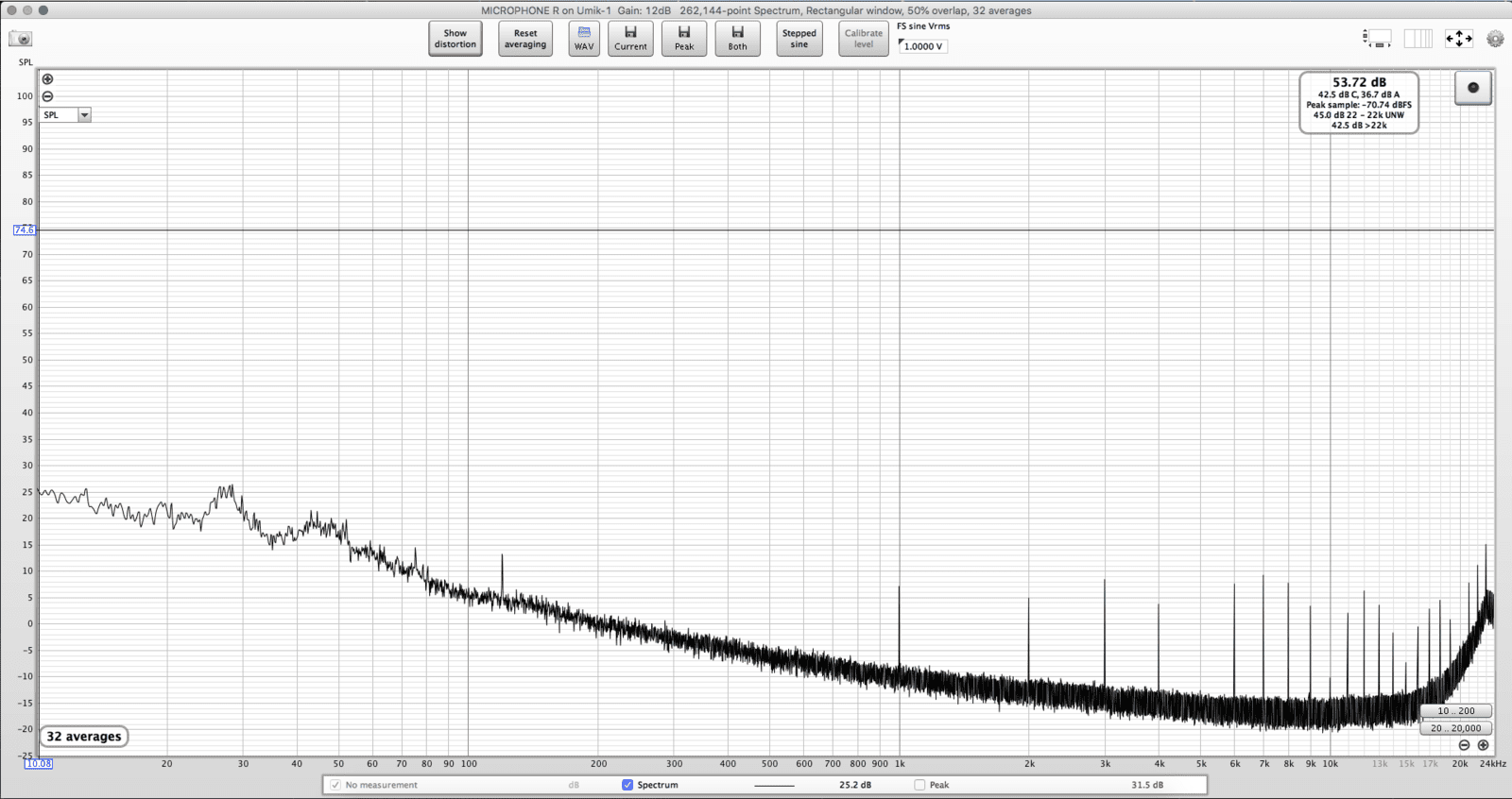 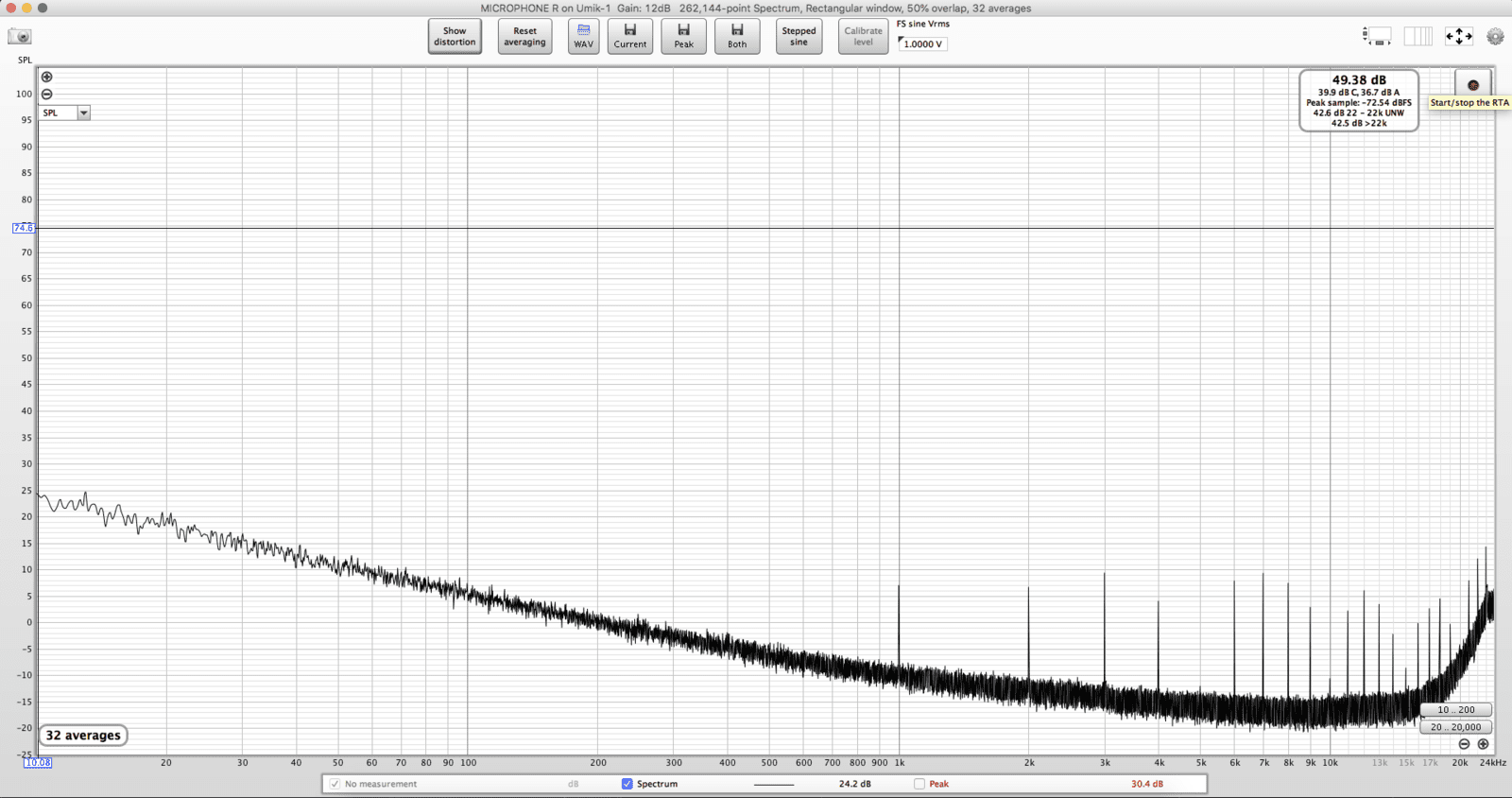 The top image is the UMIK-1 in the closet with no isolator on the mic. You can clearly see the rising low frequency response curve. Note also the peaking response around 120Hz. That's a harmonic of all the 60Hz vibrations in the building I'm in from all the refrigerators and HVAC motors causing the building to vibrate. The rise between 25 - 35Hz and again between 40Hz - 50Hz is low-frquency vibrations from the wind that's blowing and my neighbors tromping around in their units. The peaks at 1KHz and multiples thereof, are noise from the UMIK-1 itself. My UMIK-1 is an early unit that had some issues with the power supply to the mic capsule and I didn't discover this until after MiniDSP stopped exchanging them.

The lower image is with an isolator on the UMIK-1 and you can still see that there is a rising low frequency response. The noise spikes at 1KHz and above are still there as they are from the mic itself. Note the absence of the 120Hz peak and the other spurious low frequency 'bumps' in the response that are blocked by the isolator. When standing in the room with the door closed, those 3dB - 5dB bumps are inaudible to me, but the mic picks them up with no problem. Note, also, the almost 3.5dB reduction in the overall sound level provided by the isolator over the mic capsule.

The rising low-frequency noise spectrum is an issue with all these USB mics. It probably is an issue with the USB power and the power circuitry on the mic board. Some users modded their mics in an attempt to reduce the noise. I opened mine to check if it was the same as the ones people were modding, but it wasn't so I didn't want to risk damaging it—the wires to the mic capsule looked to be solid not stranded and i didn' want to break them fooling around with it.

The Earthworks M23, M30, and M50 are completely different types of mics. They are not USB powered and require 48V phantom power and a preamp to use them. It probably does not have the rising low frequency noise issue that is common with USB mics. The cost is a factor of about 5 to 12 times that of the UMIK-1 though.

@John Mulcahy posted his response while I was working on my example. Here is an SPL dB calculator that will help in understanding how dB calculations work.
R

John and Sam, thank you for taking the time to help me understand what's going on - I'm certainly no audio engineer, and have next to no experience with mics and certainly no knowledge of how they work. I assume they translate diaphragm /coil movement to a signal - essentially a speaker working in reverse.
Internal mic noise from USB power - I understand that. The little spikes (mic internal noise) are not a concern. What I have issue with specifically is the massive increasing linear slope toward lower frequencies.
If you guys say the increasing slope toward low frequencies is insignificant to the process, then I'll run with that. Hopefully, you guys can see how it would be alarming to see the mic reporting something that doesn't exist (with significant area under the curve).
If there was a mic calibration feature where a person basically says, "The current state is dead silent" and the mic is calibrated there to report 0dB across all frequencies, would results of measurements afterward be wrong?
Expecting a calibrated mic to measure flat in dead-silent conditions doesn't seem odd to me. And if the mic can't do that out of the box, there could be a way to achieve that true reporting afterward.
R

Very useful, I see how lower dB incoherent sources have lower than expected effect - this is very useful for motorcycle communication systems (more on that later).
This has me questioning what exactly is incoherent noises relative to our discussion of linear slope increasing from 0dB (at 3500Hz) to +40dB (at 30Hz).
He uses the example of violin and trumpet and this makes good sense to me. However, I might argue that if every frequency is increasing linearly from 3500Hz to 30Hz, then it is NOT incoherent to a frequency sweep running through the same frequencies. So if the sound IS coherent, what is the impact to perceived loudness? Guess the question is, how is a constant rise of mic response not coherent with a frequency sweep through the same frequencies?

Reminds me of room acoustics, where crossing high and low pressure waves from reflected surfaces result in double-high peaks and valleys and everything in between created by intersecting pressure waves. To my understanding, they are coherent and considered additive (80dB + 40dB = 120dB).

For motorcycle comm systems, where I listen to music constantly (Shure SE315 IEMs), periodic GPS navigation prompts, bike-to-bike intercom conversations, and radar detector warnings, all simultaneously isn't a loudness problem. Because they are incoherent sounds, only the loudest source is significant. Good to know!

RiceToy said:
If there was a mic calibration feature where a person basically says, "The current state is dead silent" and the mic is calibrated there to report 0dB across all frequencies, would results of measurements afterward be wrong?
Click to expand...

Yes, they would. The output of the mic has two principal components. One is due to the input signal, the other is due to the internal noise of the mic and its electronics. Those two components add together to produce the output. When there is no signal all you get is the self-noise component, but that doesn't tell you anything about how the mic will respond to a signal. As the input signal increases its contribution to the output increases but the self-noise stays the same. The output is dominated by the signal-related component at any meaningful signal level.
R

Ok, thank you guys for sticking with me on this. Sounds like both coherent and incoherent sounds, when combined, have an insignificant effect on SPL. If DSP corrections result in lower than enjoyable levels of bass, its likely not because of the high SPL at low frequencies being reported by the mic, and probably just because I like bass levels more significant than reality.

So what I've done (already done actually) was leave the original DSP crossover & PEQ settings in one memory slot and linear frequency response in another memory slot. Then I can switch back and forth as I wish depending on mood.
Thanks again guys!
You must log in or register to reply here.
Share:
Facebook Twitter Reddit Pinterest Tumblr WhatsApp Email Link