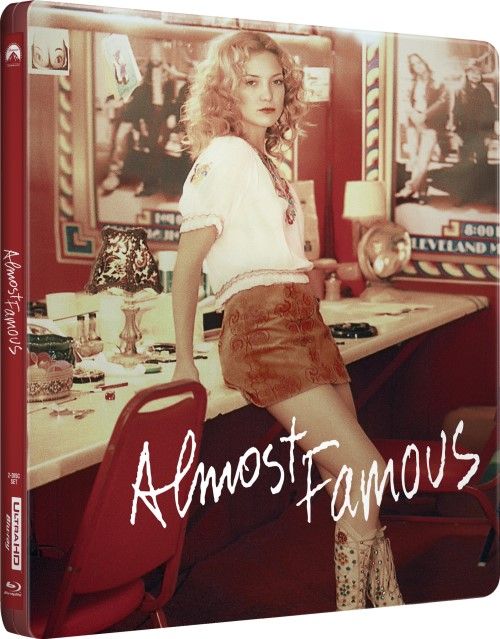 Movie
Ah yes, to be alive during the 70s and 80s of Rock music would have been something to die for. I always lament that I was born a decade too late, because I started growing up and beginning my formative years in the mid 90s, just as the heyday of Rock music was winding down. No going out on Saturday nights to see Hear, Guns N’ Roses or Motley Crue like my brothers did. Instead having to listen to all the greats on CD and Cassette tape as everything had gone heavily Grunge and Prog rock at the time (soon to be followed up with the early 2000s dip into pop music). But I can still dream and still love to watch anything I can of those fantastic years for rock n roll.

Cameron Crowe’s magnum opus, Almost Famous is a semi biographical music biopic loosely based upon Cameron Crowe’s own younger years as a roadie. It’s sweet, heartfelt, incredibly raw, and sometimes painful to watch. It’s a growing up experience. A coming of age, if you will, that puts a young teenage boy right into the heart of a band during it’s touring hey day and all the pitfalls and benefits that comes along with “riding with the band”

William Miller (Patrick Fugit) is your typical high school genius who’s too young for his intelligence level. He’s skipped a few grades thanks to his over protective mother Elaine (Frances McDormand), but he’s completely in love with music. His sister Anita (Zooey Deschanel) is off to fly the friendly skies in an effort to “find herself), leaving her younger brother a vast record collection that soon sparks William’s own love of music. Elaine is vehemently against the sex, drugs, and rock n roll of the music industry, but that isn’t about to stop William from absorbing as much knowledge as he humanely can. At the age of 15 he lands a job as a journalistic writer for Creem magazine (impressing the very cynical music exec in charge of the magazine played by William Seymour Hoffman) and is off to interview Black Sabbath (wouldn’t we all love to interview a young Ozzy). Not able to get in, William wheedles himself into the door by impressing a mid level rock ground named Stillwater with his incredible encyclopedia style knowledge of their works, and suddenly young William is in the thick of it.

He meets a young groupie (sorry, BAND-Aid, as they’re NOT groupies according to Penny) named Penny Lane (Kate Hudson), gets a job for Rolling Stone magazine by pretending to be an adult journalist, and hangs with the band as they tour the country. Naturally conflicts occur between people as William is attracted to the mysterious Penny Lane, who is in turn attracted to the Lead guitarist of Stillwater (played by Billy Crudup) who is in turn in conflict with their lead singer (played by Jason Lee). Not to mention missing graduation, worrying his mother sick, AND living the dream of touring with a rock band all in one summer.

Almost Famous lives and breathes by the characters and the wandering sensation of growing up in a world of music. The film is probably Crowe’s best film (even above Jerry McGuire) to date, and it shows how much passion and love he put into the movie. As I mentioned above, this was written, directed, and ABOUT Cameron’s own teenage years in the movie industry where he was a bit of a roadie himself. The excitement, the love of music, and even the painful follies of rock stars is on full display here. But no matter how some of the cautionary moments go, you can absolutely see the adoration for a world that is now filled with aging legacy bands, in an era that is never to be replicated again.

Despite being a drama, the film is not overly insistent on making up unnecessary drama. The movie flows effortlessly, simply chronicling William’s coming of age in the music industry. He falls in love, he lies a bit, he gets in trouble, and he grows as a human being while learning what music is all about. It’s not just listening to songs and memorizing facts. It’s a world of immersion and losing yourself in the flow. Becoming PART of the musical experience. It’s what makes the film so intense to watch (even though the bootleg cut is a bit overly long and meandering if I do say so myself. The theatrical version is my personal favorite version), and why it’s such a sweet experience.

All in all, this is a stunning release. It looks incredibly filmic with a sort of worn out look that Cameron Crowe was very intent on replicating. It’s not gritty and heavily textured, but has that sort of warm and burnished color scheme to it combined with slightly yellowish and brown tones to soften it a bit. Fine detail levels are incredible, showing off every fiber of hair on Kate Hudson’s curly locks, and intricate stitching details on clothing and guitar textures. The grain was always so “meh” looking on the Blu-ray, and this new remaster certainly cleans it up a good bit. Grain structure is tight and accurate, without any signs of DNR or other digital smoothing to the picture. The Dolby Vision enhancements are really subtle in some ways (colors leaning toward that warmer end of the spectrum with yellow and browns don’t really lend itself towards super vivid “pop”), but black levels and daylight sequences (such as the green of a lawn) are amazing. Blacks are deep, inky and show no major signs of crush or banding at all. Contrast levels are vastly superior to the old Blu-ray, and overall this is a large step up from what we’ve been able to enjoy to date.

Paramount recycled the 5.1 DTS-HD MA track from the previous release, and it’s a solid entry. Nothing really overly special to write home about, but it does the job well enough. The film is a very talky experience, with long periods of time where only dialog is present, but it does fill out the back end of the room and richen up the experience when Nancy Wilson’s 70s rock score lights up the sound stage. LFE is subdued and mild for most of the mix, but once again, when the music kicks in the bass starts punching away. The crowd’s roar and swelling crescendo of yells reverberates through all channels, and the film just really opens up and LIVES during those musical stage performances. Dialog never fails to disappoint, but overall this is a good track that just doesn’t have the massive awe inspiring power that other music biopics have enjoyed.

As with all the other Paramount Presents discs and remastered 4K UHD discs, Paramount has gone the extra mile and really pulled out the stops for this one. A classic movie with both the Bootleg cut and theatrical, new extras, AND a fantastic encode. The only thing that slightly saddened me was that Paramount recycled the 5.1 DTS-HD MA track from the Blu-ray, and while it’s good, an upgrade to Atmos would have been really fantastic. Especially when you consider the fact that the 5.1 mix has always been “good” but not “great”. Still, a fantastic release for a fantastic film and very highly recommended.