Aircraft Carrier: Guardian of the Seas 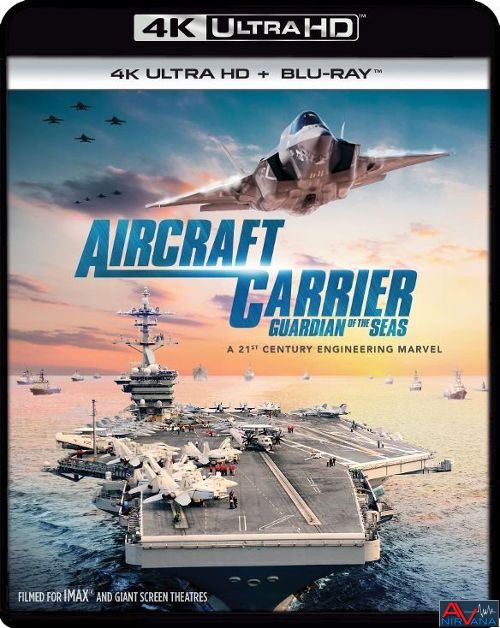 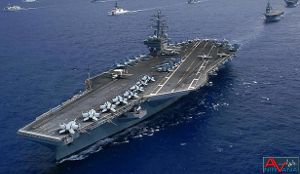 Movie
I always love these IMAX documentaries that Shout Factory puts out, as they not only are fantastic demo discs, but they usually have chosen some very interesting topics for the 40 (ish) minute subjects. They never are anything TOO in depth, or have the audience think a great deal, but they’re great little introductory forays into the world of whatever subject they’re about, and are more than entertaining to myself and everyone else who has watched them in my experience. This time we have a collaborative work between K2 Communications and Giant Screen films, and the creator of the IMAX documentary Rocky Mountain Express to bring us a look the U.S. military aircraft carriers and their history and inclusion in modern warfare. The end result is a fun 43 minute jaunt that actually has a great amount of information on the camel of the seas, and how integral they are in our modern day military fights.

If you’ve ever been close to an aircraft carrier you know how awe inspiring they are, even after literally DECADES of use going back to as early as Pearl Harbor. Gigantic structures, they just out into the ocean leaving a visual footprint that is literally unmistakable to anyone in the world. They have always been known as the air force’s and Navy’s gigantic beasts of the seas, and for good reason. They can literally chug along forever with their massive fuel resources, carry dozens of fighters and other various planes, and take an enormous amount of fire power to take down. According to Stephen Low and producer Bob Kesser have stated that Aircraft Carriers is a passion project that took them over 10 years to create. The aerial shots and up close imagery of the different carriers presented throughout the documentary seem to back this up, as there are literally HUNDREDS of different images of differing carriers. Huge sweep aerial shots abound, with up close and personal images of individual bits of the hulking ships abound, and the pinpoint precision and attention to detail on the IMAX pictures is truly jaw dropping. 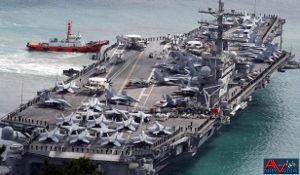 The heart of the film is based upon the every other year Pacific Rim exercises (no, there are no Jaegers there), where columns of Navy ships proceed for some of the intricate war games ever created. We get to see at least 4 different carriers up close, and Low delves pretty deep into how the technology for the various ships has stayed the same, and how it has adapted and been updated to serve a more modern war machine (he mentioned the inclusion of the deadly F-35 fighters as an example of newer and nastier additions to a carrier’s arsenal).

While the movie is a glorification of some of our most powerful sea going vessels, it is also a plea for peace in a day when the world is terrified of another great war. There is a scene of the now decommissioned U.S.S. Enterprise with one of our narrators offers a somber message of “If there is another great war, nothing will rise from the ashes: neither righteous nor evil”. It’s a solid mixture of both patriotic joy at seeing the accomplishment of man, but also a reminder that we are always on the brink of destruction, and temperance is the wisest action in many cases. 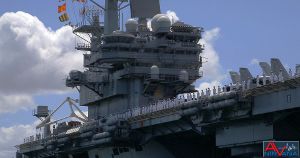 Now the single best feature of these documentaries are the video encodes. True IMAX shot films look AMAZING on Blu-ray and 4K, and this exactly what we get. An absolutely pristine picture (both on the Blu-ray and this 4K UHD disc) that just dazzles the viewer. There is some older footage thrown in that looks a bit wonky, but that is naturally source related. However, the 1.78:1 framed IMAX shots are breathtaking in nature. Intimately detailed and neutrally graded, the razor sharp image shows off every crook and cranny of the giant aircraft carriers, and the beautiful oceans surrounding them. Shout Factory gives us the obligatory (for them at least) option to choose the HDR presentation (which really gives those colors some serious pop) or the SDR presentation (for those who have older 4K TVs), and naturally the HDR presentation is leagues better. Comparing directly against the HDR and SDR presentations really goes to show just how much SDR really contributes to the 4K experience. The colors are warmer and more vibrant, and the black levels deeper and more intense. It’s an overall amazing looking 4K disc, and another IMAX demo disc for my library. 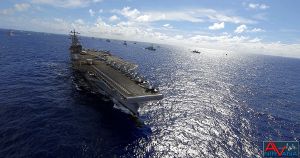 The Dolby Atmos track (that is pretty much a standard for these IMAX documentaries) is a modest venture that sounds REALLY nice, but is not overly aggressive or intense. The Atmos features of the track are mostly discrete noises based upon the ships ambient sounds, as well as the humming of aircraft in the background. There’s an appropriate rumble from the subs with the engines throbbing, as well as accentuating the score just a bit. Surrounds and overheads are pleasantly used, but they’re not used so heavily as to become one of the top tier Atmos tracks. Dialog for the narration is clean and clear, and even some of the older footage used shows great audio clarity. Once again Shout Factory has cranked out another great Atmos mix, and while this one isn’t the best of the best, does everything asked of it from the documentary without question or problem.

​
Aircraft Carriers: Guardian of the Seas is another fun IMAX documentary from Shout Factory, and one of the better done ones in recent history. Maybe it’s because I’m a military buff, but watching the sweeping shots of the different carriers (whether from far away aerial shots, or the close up intimate ones) had me completely mesmerized to the point where I completely thought 10 minutes had gone by, only to see the credits start rolling. Stephen Low does a great job with the direction of the film, balanced the more technical bits with a common plea for peace, despite the nature of these war machines in the military of today. The audio and video are nothing short of amazing (as usual with these documentaries), and while the extras are certainly intriguing, they are a bit short in quantity and length. A fun watch for sure.

Thanks for the review. I will have to check this one out that is for sure.

As a sailor, I think this is a must have. Thank You Michael

Excellent review, here... great read!! I look forward to checking this out!

Jack said:
As a sailor, I think this is a must have. Thank You Michael
Click to expand...

I didn't know you were a Sailor Jack. my hats off to you for serving

Thank You Michael. This brings me to the real reason for my wanting to watch this disc is that I was part of the Air Navy, we flew over these guys at 30,000' but I had not seen a ship up close until long after I have left the service. I was on a mothballed carrier in Charleston, if I remember correctly but these new craft are another level indeed.
You must log in or register to reply here.
Share:
Facebook Twitter Reddit Pinterest Tumblr WhatsApp Email Link