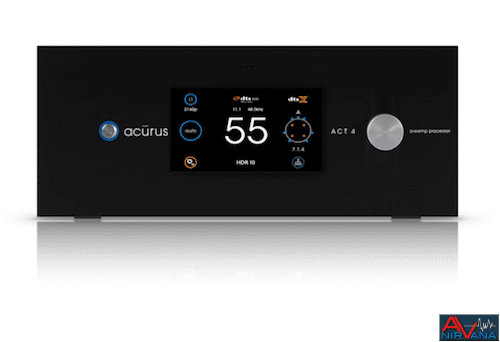 (Indy Audio Labs, LLC)(February 7, 2018) Indy Audio Labs, LLC, is upping its game – literally – by announcing that its Acurus ACT 4 processor is set to receive a massive upgrade. As of Q2 2018, the ACT 4 will be endowed with support for 9.1.6 Atmos speaker arrays in addition to four other output channels. That means owners will possess the ability to natively run expansive 9.5.6 and 9.7.4 systems.

Current ACT 4 owners are due to have access to a hardware/firmware upgrade kit sometime during April 2018. And the company is outfitting all new ACT 4 processors with 20-channel capabilities at its Indiana-based factory.

"We were the first sub-$10k wholly-designed American immersive audio processor, first with both 7.3.6 Dolby Atmos and 7.1.4 DTS:X native decoding, first with full support of HDMI 2.0b with HDCP 2.2, and now first to expand into the 20-channel realm with 15.1 Dolby Atmos native decoding plus 4 extra configurable channels,” explained Ted Moore, Indy Audio Labs Co-founder and CTO. “Couple this layout expansion with the ACT 4's superb implementation of the latest Dolby and DTS upmixers and you have a listening experience that's as phenomenal as it is flexible.”

The ACT 4 carries onboard decoding for both Atmos and DTS:X, along with Dolby Surround and NeuralX upmixing. It also offers eight HDMI inputs with 4K pass-through, two HDMI outputs, and an impressive array of balanced and unbalanced multichannel outputs. User interaction is enhanced by a sharp-looking 7” LCD touch-panel.
Last edited: Feb 7, 2018

Stay tuned for new info about onboard EQ functionalities!