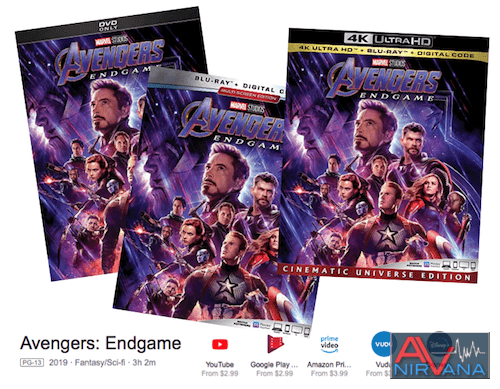 (January 28, 2020) With 2019 in the rearview mirror, it’s time to scrutinize the consumer disc market by reviewing several different sources of yearly disc-based data. At this point, it’s no secret that streaming and digital mediums are crushing physical media; disc sales have been in a free fall for years, and the industry is actively responding. Several major manufacturers have abandoned production and/or development of 4K UHD disc players, and a recent announcement by Warner Bros. and Universal demonstrates the disc market is becoming more difficult for studios to sustain.

Consumer spending, as a whole, isn’t the issue for disc-based media. According to the Digital Entertainment Group (DEG), the masses dropped more on home entertainment during 2019 than ever before, with streaming and digital movie sales accounting for a bulk of the $25.2 billion spent. The DEG says that subscription streaming’s share of the pie was 63% (up from 23.7% during 2018), with disc-based sales producing $3.29 billion (13.05%). And while $3 billion is hardly chump change, it represents a 9.4% decrease from the year prior. Not surprisingly, disc rentals also fell, plummeting 19.5% to $1.44 billion; the news for video rental stores isn’t much better, tumbling 21.1% with total sales falling in the $250 million range.

Pro Tip: this is a bad time to open a video rental location.

Digging a bit deeper into disc sales, a recent report by MediaPlayNews illustrates 4K UHD Blu-ray’s struggles in the overall market. In general, 4K discs account for roughly 10% of monthly disc sales. In fact, only two of 2019's Top 50 best-selling titles saw 4K releases account for more than 20% of overall sales (Avengers: Endgame with 22% and Alita: Battle Angel with 23%). The next closest titles fell in the 18% range, and that was only a trio of films (Spider-Man: Far From Home, John Wick: Chapter 3 – Parabellum, and X-Men: Dark of Phoenix).

The industry has continued to push 4K titles, with 41 of the MediaPlayNews Top 50 best sellers finding their way to Ultra High-Definition. However, standard Blu-ray continues to rule the roost, with the majority of Top 25 selling titles having been purchased on the format. Six titles (Avengers: Endgame, Captain Marvel, Spider-Man: Far From Home, Ralph Breaks the Internet, Alita: Battle Angel, and Little Mermaid: Signature Collection) saw Blu-ray sales top 70%. Interestingly, both The Mule and A Star is Born (Top 25 selling titles) were more commonly purchased on DVD.

According to The-Numbers.com, sales surveys estimate that Avengers: Endgame was the best-selling video title of the year, delivering $84.82 million in sales. The next closest title, Captain Marvel, was the only other film to generate more than $50 million in revenue.

So, what’s the take-home? For hardcore home theater enthusiasts, 2019’s disc numbers are certainly disheartening. Total revenue and segment health continue to falter, and the promise of an unfettered UHD experience via 4K physical media isn’t moving the needle. The average paying customer is proving – once again – that convenience (i.e., streaming) and older technologies (DVD and Blu-ray) are preferred to pure quality. The good news is that disc sales remain in the billions, which should help to keep physical media alive for the foreseeable future.
Last edited: Jan 29, 2020

As long as disc sales are in the billions, they will continue to be here.

In case anyone is wondering... here is the Top 50 Best Sellers of 2019 as reported by MediaPlayNews.com

It’s simply summed up as “people want quantity over quality”. Then again that’s what makes the U.S. a consumable market. Buy it then ditch it.

Off topic, but, I heard a crazy stat the other day: 90% of things purchased in the US are thrown away within 6 months.

I can believe it.

We do live in a disposable economy.

When things break, people get rid of it, don't fix it. Things have gotten so cheap that there is no point fixing, which could cost more in some cases.

As Phillihp23 stated, quantity over quality... and in this case, cost over quality. Just want it dirt cheap...

tripplej said:
I can believe it.

We do live in a disposable economy.

When things break, people get rid of it, don't fix it. Things have gotten so cheap that there is no point fixing, which could cost more in some cases.

As Phillihp23 stated, quantity over quality... and in this case, cost over quality. Just want it dirt cheap...
Click to expand...

Unfortunately, there is only a niche market that we all belong to that wants quality, the vast majority want it dirt cheap and don't care about quality. lol.

Looks like we are moving towards Japans disposable process too...if we in fact are just throwing it away after we tire of it or it breaks.This gives no incentives for manufacturers to give long warranties...which in turn. means that they can make stuff cheaper since it only needs to last 90 days to a year.

Here is a perfect example. A friend of mine bought a cheap vizio TV. Later, after the 30 day warranty was up, the TV stop functioning properly. He called Vizio and they told him to throw it away and buy another one.

Trash and earth friendliness would be two excellent arguments against keeping physical media alive... we just need an affordable alternative that matches quality.

If we end go to nothing but streaming our cable bills will shoot up for all the data usage too even with the reduced file size and reduced quality vs hard media.
B

All this talk makes me want to go out and buy a copy of WALL-E, rip it to my media server, then toss it in the trash.

Negatron said:
If we end go to nothing but streaming our cable bills will shoot up for all the data usage too even with the reduced file size and reduced quality vs hard media.
Click to expand...

And we thought high cable bills due to bundling were a problem!
Sure as the cable companies that own the internet pipes continue to loose revenue they will seek alternative income streams, i.e. tiered data rates.
And of course paying for a la carte streaming services can drive you nuts with constantly changing sources, bundling, limited time introductory offers etc.
The whole thing is a ridiculous mess that will cost more (like for like) and get worse before it gets better.
Rant over.

Capitalism at its finest or worst? Greed, it is as simple as that.

I do hope discs stay around for a while longer. I've got nothing against the idea of streaming, but as has been pointed out, the quality needs to be on par with optical media, it needs to be packaged so that you can get what you want affordably without paying for what you don't want, and you need to still be able to afford your internet service.