2 subs worse than one?

Hello, not strictly a rew question and more to come! I hope someone can help as I am pulling my hair out!!
I have a room that gives very bad responses and this is probably because its square and the listening position needs to go quite close to the back wall.
The room has a big peak at 40 pretty much wherever you place the sub in the room at mlp.
The response across a two seat sofa varies greatly in the 60 to 100 range (moving the mike 4 inches really makes a difference) which is why I want to try 2 subs.
The first problem I am trying to address though is why 2 subs always appear worse than one.
I have 2 subs but of different types. If I can get this to work I will replace both to get matching subs.
I have been taking lots of responses over the past couple of days and one consistent issue is the output from 2 subs is always worse than 1.
The output is significantly down in every case and the flatness of response either worse of at best the same.
I am hoping this is user error but I can't figure it out.
Using a minidsp I mute the subs and consistently in all the positions I have tried either one of the subs has more output and a more even response than the 2 together.
The gain structure does not change.
I have tried changing phase on one sub.
I have set distances correctly and then tried increments from 0-7.5
I have tried colocating and facing the drivers together a few inches apart and I have stacked the subs on top of each other facing the same way.
All in varying degrees have either single sub looking better than both together.
The subs are different with one being a 15 diy sub and the other being a very capable manufacturer 12 sub.
Any help as to what to try would be hugely appreciated.

A square room and back wall LP are significant concerns. The different SW designs is another issue, so it may be difficult to find a good setup. In general though, two SWs would normally result in additional SPL through most of the range if properly set up. There are always tradeoffs through parts of the frequency range and the issue may be to find timing that provides the SPL support in the region that it is most needed.

I can look at an example or two of your current mdat measurements if you like. I may be able to explain why you have not seen a more favorable combined result so far. You would need to provide an mdat containing the 2 Individual SW measurements and the combined measurement for each setup that you would like comments on. Some general info on your equipment would help, e.g., stereo?, AVR? MiniDSP?, PC based?

jobby001 said:
The output is significantly down in every case and the flatness of response either worse of at best the same.

I have set distances correctly and then tried increments from 0-7.5
I have tried colocating and facing the drivers together a few inches apart and I have stacked the subs on top of each other facing the same way.
Click to expand...

Something is definitely wrong here. With the two subs co-located, you should get pretty close to the same frequency response reading with one or both together.

If you’re getting less SPL with both subs running, that suggests to me that one of them has reverse polarity compared to the other.

Thanks for the response.
Yes it definately seems like they are working against each other.
One has a phase nob so turned that fully each way during testing including when co-located.
Also seperately tried the invert fuction on one in the minidsp just in case the phase nob wasnt working.

A bit more background.
Its a surround sound system.
The AV amplifier has multiEQ XT32 with the app control and dual subs out. It sets distances and levels and then eq dual subs as on.
I also have a minidsp 2x4 with the 2.1 pluggin so can set seperate delays and import rew eq
I use a umik and rew v5.18 and I am a very basic rew user.

The room is pretty much square and the listening positions are two seats next to each other that unfurtunately are only a foot away from the back wall. I know this is not ideal but I need to make the best of it. There are two issues with the bass.
There is a huge peak around 40 which sub position doesnt seem to effect much. Audyssey/REW eq takes a bit of the peak but not much and it makes the bass boomey and lacks any slam higher up the frequency range.
Between 60 and 100 there are lots of dips and a very messy graph. If you move the umik 6 inches though it all changes and there a whole other sets of dips. Its like that along the 3x1 foot corridor of our listening position.
By adding a second sub the theory was it would improve the consistancy of the bass in the higher range and whilst it doesnt fix the 40 peak it would give more headroom to be a bit more aggressive with manual eq to level it out.

Initially I just let Audyssey do its thing. Its measurements for delays were accurate as per my physical measurements and it didnt complain about any phase issues but Im not sure it does with subs. When I measured the results with rew from a couple of positions the results looked worse than the single sub so I then introduced the minidsp and turned off Audyssey and zerod out the time delays on the avr to take further measurements.

I tried 4 difference sub placements adjusting phase each time along with using measured distance settings as well as just going through the available 7.5ms band 1 at a time to see if the response is any better. Playing with the timedelays could make the response better in certain frequency ranges but the delays didnt respond to actual measurements anymore and the output was never better than one sub.
Whilst testing the gain structure was like for like but after that was done I also increased overall gain from the avr to see what headroom was available.

I started off with good methodology but it got a bit frenzied as I was getting frustrated.

I am sure I am doing something fundamentally wrong but just cant see it.

The misidsp is the basic version and should push .9v which is enough to drive both subs but it has crossed my mind that maybe its output is throttled as its powered from the usb connection to the laptop. I'll get my voltmeter and test that at weekend. Or maybe take the minidsp out of the chain.

Thanks for the data.
The 2 SW were first time aligned. This was done by aligning the initial rise of the 2 step responses at 0 ms. REW A plus B arithmetic was then used to calculate the resulting combined response. Several small timing adjustments were made until the calculated SPL response matched your combined response, i.e., measurement 1 'both subs"). [Had you measured with 'acoustic timing' implemented within REW this step would not have been necessary as the correct relative timing between the 2 SW measurements would have been preserved in REW.]

After inverting the polarity of SW 2 in REW the net SPL result of the combined response is now supportive as shown below.

With this polarity change the large 40 Hz SPL peak will be very difficult to effectively address with EQ. You can try it and see if Audyssey handle this.

The opposed polarity might be the better option of the two for this particular LP location, but it may be the reason for the large SPL differences across your seating positions. It's not clear what the better option is.

Different SW locations in the room may be more helpful to find better smoothing of the SPL response than the stacked option. Trying different timing options for the different positions can be a big job however. This can be done within REW as a modeling exercise, but still is significant work that may not result an improvement. If you provide the measurements of the other location options, I will spend a little time to see if a better option can be found. To do this I just need a SW measurement at each of the other locations. Combined measurements are not needed. The combining is done within REW.

jtalden said:
The 2 SW were first time aligned. This was done by aligning the initial rise of the 2 step responses at 0 ms. REW A plus B arithmetic was then used to calculate the resulting combined response. Several small timing adjustments were made until the calculated SPL response matched your combined response, i.e., measurement 1 'both subs").
Click to expand...

I have added a "Parametric sum" operation for trace arithmetic in the next beta (with live update as parameters are adjusted) that should make this kind of thing faster to do. 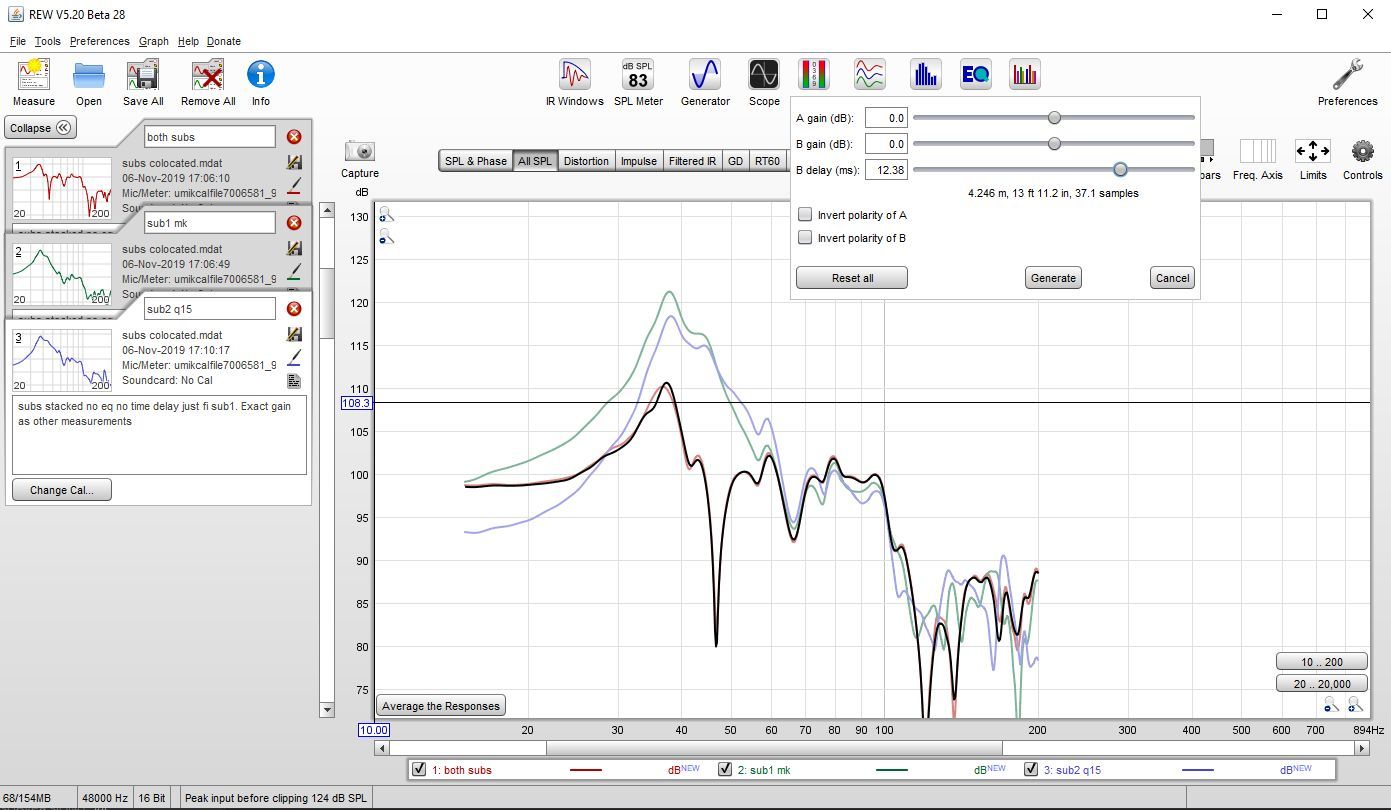 Clever! This will make it much easier to investigate the impact of alternate delay timings. Thanks!
J

Huge thanks to jtalden.
Unfortunately work commitments havent let me play around with them much yet but I have reveresed the polarity on the diy sub and yes thats looks much better!
Co-located now acts as expected in that it is increasing output.
Hopefully I can get an empty house over the weekend to move the subs around and get some measurements.
You must log in or register to reply here.
Share:
Facebook Twitter Reddit Pinterest Tumblr WhatsApp Email Link